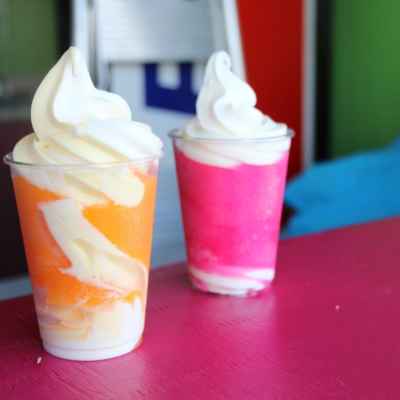 10 GREAT PLACES TO GET ICE CREAM IN RICHMOND

Sunny days are a great excuse to get some ice cream and other cold treats! Whether you’re into decadent chocolate truffle cones, or a tart, lemony sherbet, there’s something with your name on it. We’ve rounded up 10 of the best places in Richmond to dive into some ice-cold desserts.

You might recognize the owners of Something Sweet when you head into the shop. Ricky and Alicia have been creating desserts and sweet treats at the Peanuts Bubble Tea stall in Richmond Public Market’s food court for over 25 years. It was just a year or so ago they decided to open up a standalone shop in the heart of Steveston Village, serving up delightful desserts fusing classic Western recipes with a Taiwanese touch. Try their house-made ice cream, or a heaping plate of fluffy shaved ice, topped with syrups, fresh cut fruit and much more.  @somethingsweetrichmond

Believe it or not, this can’t-miss frozen yogurt and gelato shop has been serving customers visiting Fisherman’s Wharf in Steveston for over 30 years! Known for their fresh frozen yogurt served in house-made waffle cones, you’ll feel satisfied no matter what flavour you order at Timothy’s. Craving something a little on the creamier side? Check out their gelato offerings—available in cups, cones or even by the pint to take home. We suggest their coffee with chocolate chip gelato; it can’t be missed!

It’s easy to walk past this small ice cream stall—but we don’t recommend it. Screamers Soft Serve & Treats is  one of the few places left that mixes soft serve and a pop slushie into what’s known as a screamer. It’s a must-try for everyone on a hot summer’s day. Simply choose your slushie flavor, and then choose your ice cream: vanilla soft serve, pineapple Dole whip, or a vanilla and pineapple twist. You can also just get the vanilla soft serve or pineapple Dole whip on its own, depending on your preferences!

Screamers are a mix of soft serve and slushie. | Photo: Lindsay Anderson

This Korean soft serve ice cream bar is all about natural desserts. Using the highest quality ingredients and organic milk, Milkcow Café has redefined what soft serve should taste like—in the best way possible. The ice cream served here is light and creamy, and it comes with toppings like honeycomb, cotton candy, Oreo crumbs, and even mango slices. You won’t have time for this sweet treat to melt on you—it’s so good you’ll be going back for seconds before you know it.@pork_ninjas

You wouldn’t peg J.Sweets as an ice cream store—and you’d be mostly right. This Japanese specialty dessert shop is located inside Aberdeen Centre and specializes in premium-quality Japanese sweets such as delicately thin egg roll wafer cookies, macarons in a huge variety of flavours, and Royce chocolates, a premium Japanese brand specializing in matcha chocolates. But J.Sweets makes our list for their lineup of mochi ice cream bites. The flavours are switched up seasonally and are made with the highest-quality ingredients available. Some sample flavours include double mango, black sesame, chocolate banana, and even sweet potato.

The Praguery is a food truck you’ll find parked daily at McArthurGlen Designer Outlet Vancouver Airport. Instead of typical cake or waffle cones, this food truck serves up ice cream in a delicious chimney cake cone. Based on a traditional eastern European treat, these chimney cakes are narrow at one end so that they can hold vanilla soft serve ice cream and toppings. The dough is coated with oil and sugar, and when baked creates a crispy outside layer. It’s the perfect post-shopping treat!@mcarthurglenvancouver

Don’t let the name fool you! The Bubble Tea Shop serves much more than your standard bubble tea shop. Tucked away under the massive Real Canadian Superstore on No. 3 Road, this is likely the only spot you’ll find traditional egg waffles piled sky-high with toppings like fresh cut fruit, ice cream, and whipped cream, all drizzled in chocolate or condensed milk for just a touch of extra sweetness. Fancy a cone instead? They’ve substituted the traditional sugar cone or waffle cone with their own egg waffle instead. It’s truly a delicious treat!

No frozen treat list would be complete without a mention of Snowy Village Dessert Cafe. Unlike traditional shaved ice bowls, Snowy Village’s bowls are filled with milk shaved ice—a mixture of sugar, milk, condensed milk, and cream, all frozen together and then milled down into a fluffy, snow-like texture. Known traditionally in Korea as bingsoo (also bingsu or patbingsu), this bowl of deliciousness is then layered with toppings such as mango, strawberries, or crushed oreo cookies, and topped with whipped cream and a drizzle of condensed milk.

Located inside Aberdeen Square’s second floor, you’ll find I.ce Queen, the only shop in Richmond serving Thai ice cream rolls. Unlike other ice creams, the process for making Thai ice cream is a little different. The ice cream mixture is fortified with milk, cream, sugars and other ingredients, and when it’s in a liquid form, it’s poured onto an ice-cold pan and cooled to a shockingly cold -20°C. Once flattened out, the ice cream is then cut and rolled into its signature shape, placed delicately into a bowl and topped with things such as whipped cream, fresh cut fruit, pudding, macarons, and more.

Matcha Café Maiko opened its first store in Hawaii, and has since expanded to include about 20 locations—including one in Richmond. If you’re a fan of matcha, this is the place for you. Try their matcha, vanilla, or matcha-vanilla twist ice cream in a variety of ways: in a cone, in a parfait, in a float, or as a topping on some shaved ice. They also feature seasonal specials from time-to-time, including a strawberry shaved ice that’s available now for a limited time.@_maanthony