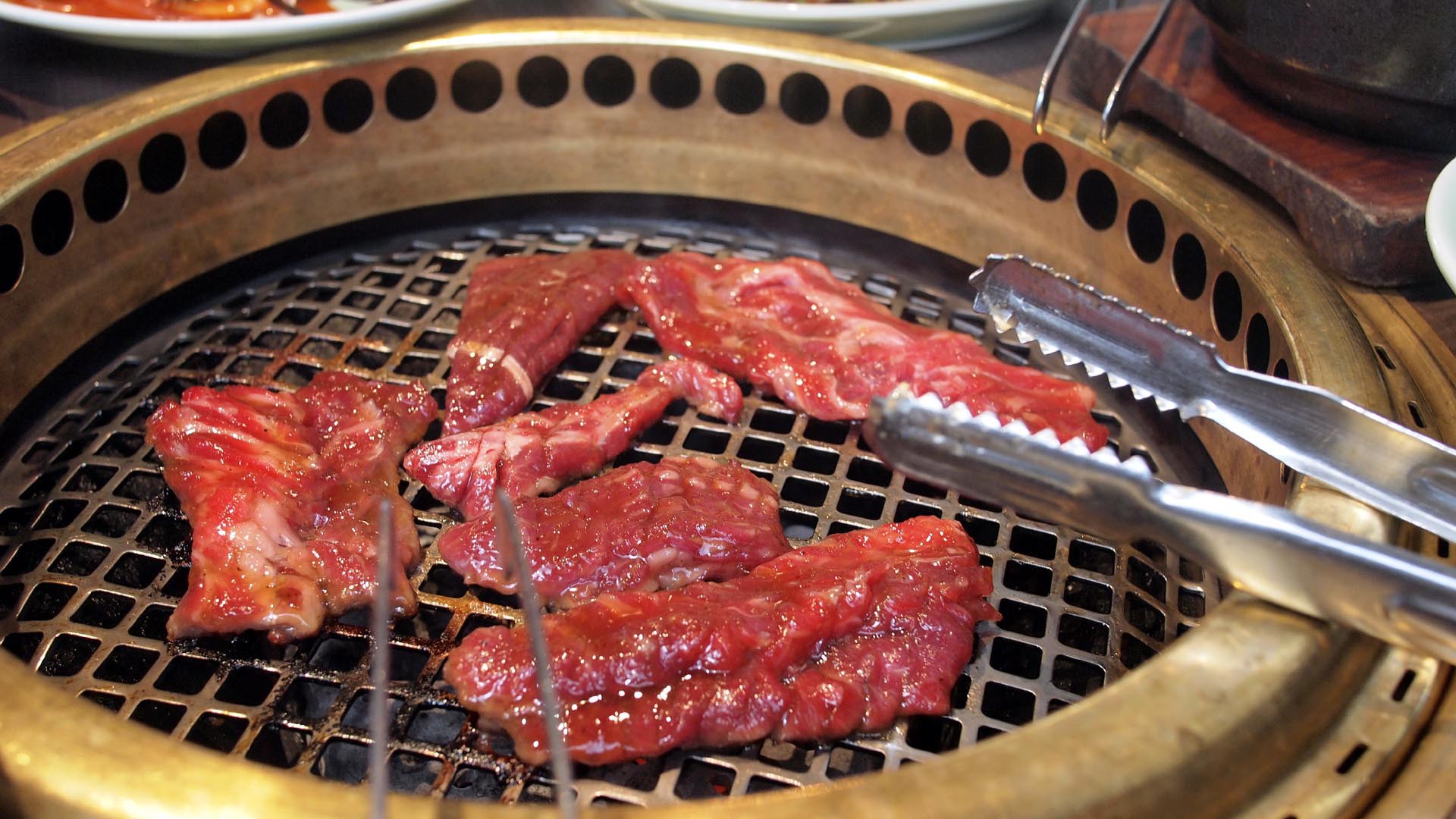 HOW TO EAT KOREAN BBQ (AT SURA ABERDEEN CENTRE)

With a table overflowing with multiple dishes, plates of raw meat, and several metal tongs, it can be intimidating to consider where to begin. It’s actually a lot simpler than you might think and it could be one of the most delicious culinary experiences you’ll ever have.

For the purposes of this guide, we went to Sura Korean BBQ (#1830-4151 Hazelbridge Way), located on the ground floor of the very popular Aberdeen Centre shopping complex.

A very common mistake that people make when they have Korean BBQ for the first time (or the 10th time, for that matter) is that they focus exclusively on the grilled meat. There’s so much more to enjoy!

Filling up on grilled meat is only one part of the Korean BBQ experience. Consider getting some hot tofu stew (sundubu), hot stone bowl rice (dolsot bibimbap), or stir-fried sweet potato noodles (japchae).

Better yet, Sura has lunch set course menus for $15 or $20 per person, providing about a dozen different dishes for a bountiful variety. Get everything from spicy squid salad to herb pork belly, and mung bean jelly to kimchi pancakes.

2. CUT THE MEAT WITH SCISSORS

Depending on what you order, the meat may or may not come pre-cut. In the case of the royal marinated galbi (beef short ribs, $35) shown below, the large slab of meat has been pre-scored and wrapped around the single bone.

After you’ve unraveled this epic piece of beef, use the provided scissors to cut the meat to your liking. Some people like to have larger pieces, because they can better retain the juices, but I prefer cutting the meat down to no larger than a business card in size.

Even before you place the first piece of meat to start cooking, it’s a good idea to season the grill after it has come to temperature. The staff will be responsible for turning on the grill for you, so don’t touch the controls yourself.

Some restaurants will provide you with a large slice of onion that you can place in the centre of the grill. After it has warmed up a little, move the onion around the grill to spread its natural oils. At Sura, a server will season the grill for you by brushing some oil. This adds flavour and helps to make sure the meat doesn’t stick.

3. PLACE THE MEAT IN SINGLE LAYERS

This is neither a stir fry nor some theatrical teppanyaki performance. Don’t crowd the grill by piling all the meat on top of itself. Each piece should have its own place on the grill. Also make sure that you unravel each piece so that it is fully flat. Sometimes the meat can fold over on itself.

4. ENJOY YOUR OTHER FOOD

While the meat grills away, take the time to enjoy all the other dishes on your table. Both the $15 and $20 lunch menus at Sura include this unique take on sweet and sour pork, for example. You don’t need to sit around and just wait for the grilled meat to be ready.

5. ONLY FLIP IT ONCE

When cooking your bulgogi (marinated beef ribeye, also available as pork in some restaurants), galbi (beef short ribs), beef tongue, pork jowl, chicken or anything else, remember that less is more. This is the same philosophy that should apply when you’re grilling up burgers or steaks in your own backyard barbecue.

Sear one side and, when it’s ready, flip it over once and cook the other side. All you’ll end up doing by constantly flipping the meat back and forth is leaving the middle under cooked while drying out the meat.

6. ASPIRE FOR THE PERFECT CHAR

Perhaps the only thing worse than under cooked meat is overcooked meat. In an effort to achieve a little bit of char, some diners may unfortunately burn their meat to an unrecognizable crisp. What you want instead is meat that has a slight char around the edges, similar to the bit of burn that you see on Cantonese char siu.

7. RETRIEVE OR PLACE ASIDE

Once the meat is ready, don’t let it linger on the grill. That’s how you get dry, burnt and overcooked meat! Either grab a piece (using your own metal chopsticks) to eat straight away or decide on a communal dish where the cooked meat can be placed for anyone to eat.

All Korean BBQ restaurants will outfit you with some delicious Korean barbecue sauce. Dip the meat in this sauce to dress it up with some extra flavour and moisture.

One of the best ways to enjoy Korean BBQ is in the form of a little lettuce wrap. At Sura, a plate of green and red leaf lettuce is $3. Don’t try to create an over-stuffed burrito with each leaf! Instead, think of each lettuce wrap like a two-bite taco.

Be creative. Along with one piece of meat, you might put a small dollop of rice, some kimchi, and perhaps a pickled vegetable. Just make sure you don’t overload it, because you really should be able to finish it off in one or two bites.

The easiest way to make a lettuce wrap is to start open-faced. Place your ingredients inside, then roll up the sides and fold in the soft end of the leaf. Take your first bite from the stem side while the folded portion holds everything in place.

You don’t need to make a lettuce wrap for every piece of grilled meat, of course. Eat the meat on its own, with some salad, or along with your bowl of rice.

10. REFILL ON THE BANCHAN

Practically every Korean restaurant will inevitably supplement your main dishes with complimentary banchan. These small side dishes can vary considerably from place to place. For our visit, Sura offered kimchi, braised potato (gamjajorim) and soybeans. Other restaurants may have spicy daikon salad (musaengchae), soy sprouts or seasoned seaweed (doljaban muchim), among innumerable other possibilities.

What’s great is that restaurants typically offer unlimited refills for all their banchan. All you have to do is ask. Just don’t abuse the privilege.

Korean BBQ is best enjoyed in groups, because you can order a much greater variety when there are more than a couple of people at the table. It’s a great social experience and can be even better with some soju.

And while you might leave other Korean BBQ restaurants smelling like your meal, you don’t need to bring a change of clothes when you dine at Sura. The extra high ceilings and terrific ventilation make for a cleaner environment, one you’ll be proud to bring your out-of-town guests to demonstrate your now professional-level Korean BBQ skills.