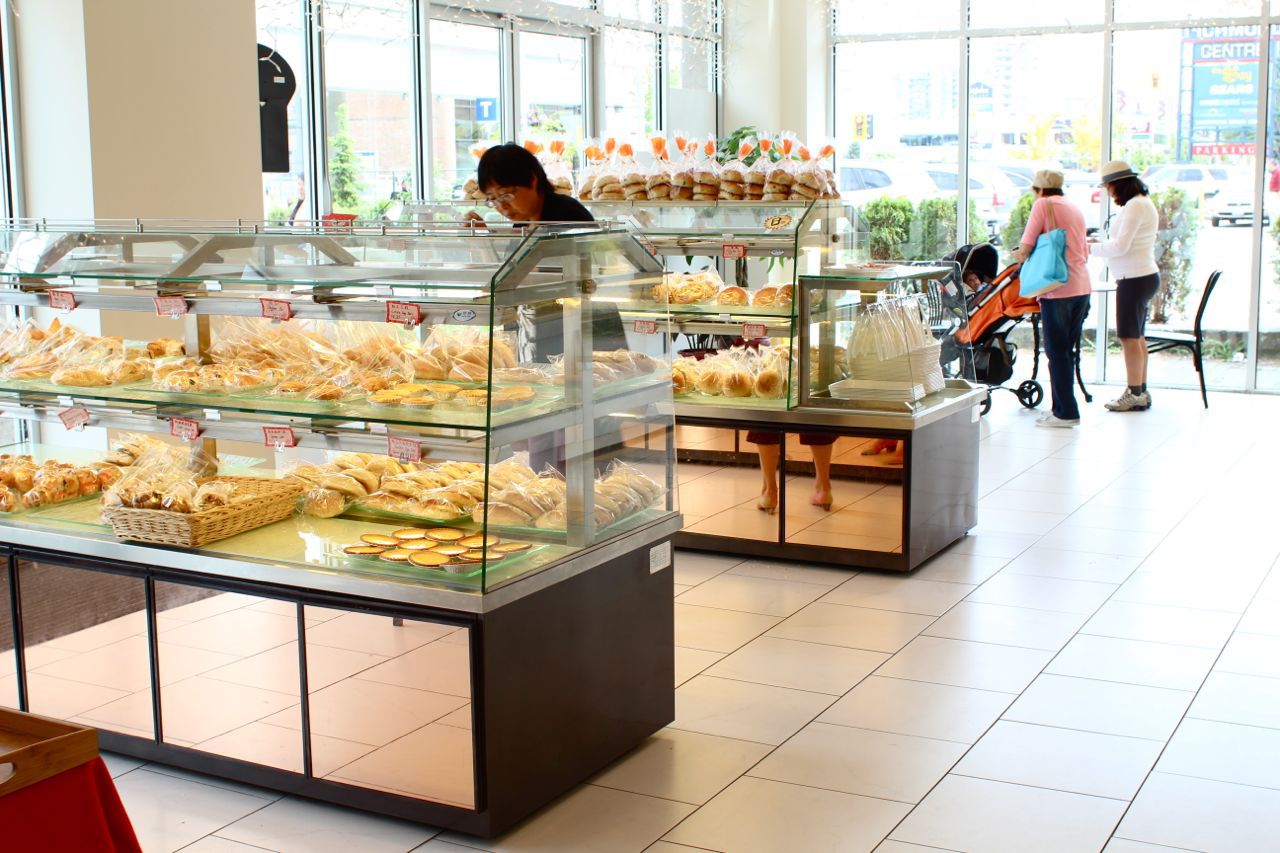 Eight days ago, when I was on my way to Nooch, I nearly didn’t make it.  It’s not that a car almost hit me or I got lost on the way, I simply rode past a bakery.  Even from the road, it smelled so darn-buttery good I came close to forgetting Nooch and stopping right there.  Bakeries do that to me, I guess.  With great self-will, I continued southward as planned, but didn’t forget it.  Oh no, I did not forget it.

The Bakery was Kam Do, located just next door to Richmond Centre facing No. 3 Road.  While its smell was familiar to me, I realized upon entering just how different this bakery was from the ones I grew up with.  Instead of displaying their baked goods behind a glass counter, the majority of products at Kam Do are on self-service shelves; customers grab white tongs and cafeteria-style trays, then load up with endless varieties of sweet and savoury buns.  And trust me, people do NOT go to Kam Do to buy just a few things; nearly every tray I saw was overflowing with individually wrapped buns (an unfortunate waste of plastic) and pastries.

The buns are soft, sort of brioche-like, and filled with everything from saucy BBQ’d pork to mashed taro and coconut paste.  There are also cookies, pastries, cakes, and tarts, with a number of staff working tirelessly to keep up with the demand.  They weren’t terribly friendly, but I do appreciate people who work hard.  Not wanting to appear out of place, I grabbed my tray and filled it up, an easy task.  All in all, with the help of some friends, I tried the BBQ pork bun, Green Bean Paste + Pork Bun (these two were dinner), the coconut bun, taro bun, and 6 pastries for dessert: pineapple, taro, date paste, winter melon, red bean paste, and lotus seed with a 1000 year egg.  The grand total was $13.50.

BBQ Pork Bun: Exactly what I wanted: sweet bread with rich pork.  I’d eat more of these for sure.

Green Bean Paste and Pork Bun:  This was really lardy and savoury, with a bit of sweetness from the bean paste.  Upon biting into it I thought, “this tastes like England.”  An odd reaction?  Perhaps, but I guess it invoked memories of Cornish pasties and sausage rolls.  Who knows, but my friends agreed:  England.

Coconut Bun: I opted for the more expensive of the two options (a sort of lattice-style bun) but actually wished I’d gone with the traditional cocktail version, which looks like a hotdog bun with coconut inside.  I’ve had those before at New Town Bakery in Chinatown(there’s also one in Richmond, which I’ll try), and found the coconut to be more moist; in this case it was a bit dried out from being exposed in the oven.

Taro Bun:  This had sweetened, mashed taro root woven throughout, and I liked it.  I liked it a lot.

And now, onto the pastries.

Pineapple:  Not a winner.  Tasted like artificial pineapple candy.

Taro:  Big and purple.  Far less flavourful than the taro bun, and I was kind of indifferent to it.

Date Paste:  Awesome.  I LOVE dates, and this tasted pure and naturally sweet.

Winter Melon:  One of their most popular, and I can see why.  With a surprisingly jelly-like texture, the flavour was sweet and vanilla-y; interestingly, it reminded us of Portuguese custard tarts.

Lotus Seed with 1000 Year Egg:  I’d be a liar if I said we threw this one back enthusiastically.  I wasn’t sure what to expect when I cut into it, but a nearly-black egg threw me off a little.  Thousand year eggs are preserved by various methods, though traditionally they were encased in a mixture of clay, wood, quicklime and salt, then over weeks or months ‘cured’ and were preserved.  The yolks become a dark green/purple/grey, while the whites transform into a brown, translucent jelly.  So yes, for one used to eggs coming strictly in yellow on white, our introduction to these was fun, but a little rattling.  They still taste like egg – a little more sulphurous, though – with a hard and chewy texture.  The first time I ever tried sushi I spat it out, and now I love it.  So considering I actually got my first bite of thousand year egg down, maybe I’ll be serving towers of them at my wedding!  Or not.  We’ll see.

I’m excited to explore more Chinese bakeries in Richmond and compare their goods.  For tourists, I’d highly recommend going to a place like Kam Do.  You can get lunch for next to nothing, and it’s truly an experience.