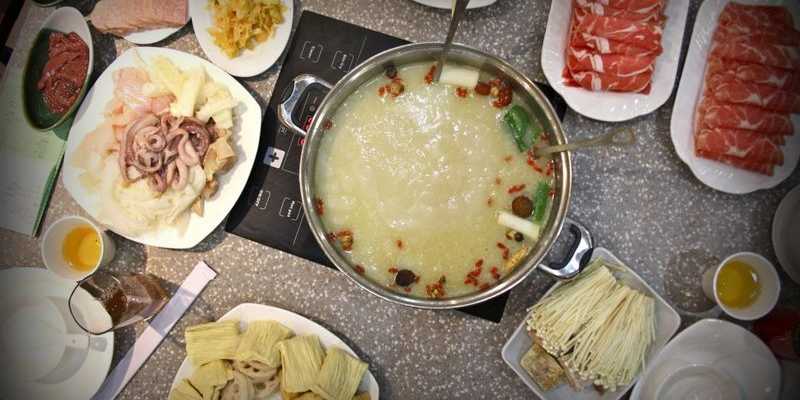 ON MONGOLIAN LITTLE SHEEP RESTAURANT, A.K.A. THE BEGINNER’S GUIDE TO HOT POT!

Last night I had my first hot pot experience in Richmond.  There was a big pot of broth, endless plates of food, and some very full bellies by the end.  I can see why the majority of advice given to me on Twitter was “wear stretchy pants.”

My friend Heidi and I met Stacey at Mongolian Little Sheep Hot Pot in Lansdowne Mall, which is Richmond’s only Mainland Chinese hot pot restaurant.  Most of the others are Hong Kong-style, which I’ll try later and report back on the differences.

It was fantastic to go with Stacey, an experienced hot potter, and Heidi, a fellow graduate of UNISG, which should translate as “willing to eat anything.”

A hot pot meal works like this: each table has an element at its center, on which a pot of broth is placed.  As with dim sum, you mark on a menu which items you’d like to order, and how many of each.

On the menu at Mongolian Hot Pot, they’re foods are listed in the same (general) order you’re meant to cook and eat them – meat first, then seafood, ‘others’ (offal, etc), meatballs, dumplings, mushrooms, vegetables, and carbs at the end.

To the right of each item there’s a “1st” column and a “2nd” column, which indicate for which ‘round’ of eating you’d like them to be delivered.  Stacey suggested ordering most things in the first round (meat, meatballs, seafood, tripe, dumplings, mushrooms, and root vegetables), and saving leafy greens and carbs for the second round.  I had the pink-coloured English menu, which has two columns (two rounds), but the original green-coloured menu has three columns!  I guess they figure us hot pot-newbies won’t make it to that third round, and I think they’re right.  I was stuffed after two.

There are seven broth choices at Mongolian Hot Pot, but in Stacey’s opinion, the must-order is their House Special Original (or House Special Spicy).  They’re famous for it, and I can see why; as soon as the broth arrived we tasted it, and even before anything had been cooked in it, the flavour was phenomenal.  It was pale at the beginning, with various goji berries, herbs, and cloves of garlic floating in it, and by the end had transformed into a darker, richer, and much more complex version of the original.

Stacey encouraged us to taste the broth at various stages throughout the meal, so we could appreciate just how much it changes with the addition of various foods.

The broth takes on a lot more fat as you go, so if you’d like to keep things healthy, and/or accommodate vegetarians, you can ask for one pot divided into two sections – one side designated for cooking meat, and the other for cooking vegetables.  The vegetable broth will be a lot healthier at the end (if you wish to eat it on its own), and with this method, more people (including those will allergies) can join in!

The food arrived quickly, and with colourful plates crowding the table, Stacey set to work.  You can either put all the food in at once, or approach your meal with a bit more technique, choosing to put items in first that take a while to cook, such as lotus root, winter melon, black fungus, tendon, and tripe.

While those are simmering, you can eat the quicker-cooking items, such as the thin slices of meat (which literally take several seconds to cook) and the tofu and gluten, which absorb the broth like sponges and heat up quickly.  Because you’re working with raw foods, especially meat, it’s important to let things cook long enough, though you also want to avoid overcooking things.  You don’t want your dumplings swimming in there too long, for example, or they’ll fall to pieces.

If you’re a condiments-lover, there’s a sauce ‘bar’ with complimentary soy sauce, peanut sauce, satay, chili paste, and others.

The sauces are tasty, but beware – they’re very salty and your food takes on plenty of flavour in the broth alone.  If you dip every last item into sauce before eating it, all the water in the world won’t quench your thirst.

By the time our food arrived, I was so hungry I could have eaten everything raw, but within a few minutes the feast was on its way.  My favourite items were the sliced pork, shrimp balls, veggie and pork dumplings, black fungus (apparently excellent for the arteries!), tofu puffs, fresh bean curd, gluten, and intestine.  I gave the congealed pork blood another go (I hadn’t had it since Bubble World), and this time it went down quite easily.  The flavour was a lot milder (almost nonexistent, in fact) but it did still have that stick-to-your-teeth texture.  I also gave the pork liver another try, but it has yet to woo me.

As we ate, we talked about liver preferences – Heidi and I grew up with liverwurst, which we both really like, but neither of us are enamoured with the stuff straight up.  Stacey is the complete opposite, and finds ‘spreadable’ liver unappealing.  We’re both willing to try the other versions, however, and that’s what matters!

By the time we’d finished our first round, my pants were feeling mighty tight.  We took a little break though, and by the time the vegetables arrived, bountiful and in their small basket, I was ready for them.

Eating something fresh and green was the perfect way to end the meal, and I’m now more inspired than ever to start cooking Chinese greens at home.  They were tender, slightly bitter, and tasted of health.

What were we drinking through this whole epic meal, you ask?  There was the usual tea for us when we arrived, but Stacey said the classic, thirst-quenching drink for hot pot is plum juice.

It’s made from dried plums, which producers must smoke as they dry them, because the flavour and aroma was intensely smoky, a bit tart, and only subtly sweet.  I liked it, and Heidi loved it!  She said it was like having all the peaty, mossy goodness of a scotch, but without the alcohol!  We also tried a canned sweet herbal tea, which was much sweeter than the plum juice, but I liked in small amounts.  I sipped it slowly at the end of the meal, like a dessert.

My first hot pot experience could not have been more delicious, or with better company.  If you’re wanting to try it for the first time but find the whole thing a bit intimidating, just remember these simple steps:

1.  Bring friends.  Hot pot is the perfect communal meal, and the more appetites you have, the more things you can try.

2.  Don’t wear your best clothes.  There’s food being passed around, dipped in and out of the pot, and even if you don’t spill on yourself, the whole place   smells (gloriously) of savoury broth, which you and your clothes marinade in the entire time you’re there.

3.  Remember, you can always order more.  Start slow, ordering one of each thing you find interesting, then go from there.  The food takes just minutes to arrive once it’s been ordered, so don’t feel the need to get everything at once.  Wait until you’ve had your first two rounds (meat and vegetables) before you think of ordering rice or noodles.  Chances are you’ll be too full for them, anyways!

4.  If you’re unsure of how to write down your order on the menu, don’t be afraid to ask the servers for help.  Also, it’s OK to wave them down if you need anything.  They don’t mind – it’s normal protocol!

5.  Finally, as long as you’ve cooked your meat/fish/dumplings etc long enough, don’t worry too much about your technique at first.  As a group, you’ll have fun cooking your meal together, and the world won’t end if your fish gets a little overcooked or your dumplings fall apart.  Just have fun!

For you well-seasoned hot potters out there, what are your favourite Richmond restaurants for hot pot?