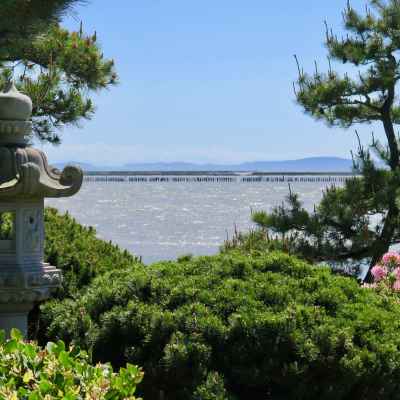 With temperatures rising and spring in full bloom, Richmond locals and visitors are rediscovering their sunglasses and heading out to explore the city’s inviting green spaces.

From the shorelines of Iona Beach Regional Park to the trails of the Richmond Nature Park and the rainbow-hued flowerbeds of Paulik Park, there are plenty of places to unplug and commune with the great outdoors.

In our fifth Outdoor Escapes story, we give you the lowdown on Garry Point Park, a refreshing, breezy waterfront park just steps from the heart of Steveston Village. Read on for our handy tips on how to plan your visit and what to look out for at this popular spot.

Occupying 30 hectares (75 acres) of gently rolling grassy areas, Garry Point is fringed by a sandy, log-strewn shoreline. A magnet for visitors, the shimmering waterfront offers panoramic views of the Fraser River’s South Arm and beyond—those are the low-rise silhouettes of the Gulf Islands winking at you across the water.

On warm days (especially weekends), everyone in the village seems to be promenading along the park’s circuit trail, glancing at the water, looking for birds, and watching kite-flyers take full advantage of the unobstructed breezes. Don’t forget: Garry Point’s annual Pacific Rim Kite Festival is coming up in June.

This is also a popular picnic destination, complete with its own concession stand counters at the eastern edge of the park. And for those curious about Steveston’s salty history, there’s some fascinating heritage to discover here as well.

While 2019 is the 30th anniversary of Gary Point Park’s official opening as a park, its story goes back much further. Start your visit near the entrance at Kuno Garden, which is filled with Japanese horticultural features and symbolic stone structures. It commemorates the centenary of the first Japanese immigrant who arrived here in 1888, one of many thousands who fuelled Steveston’s fishing industry.

The importance of fishing is recalled in two other ways in the park. Shaped like a giant fishing net needle, the striking Steveston Fishermen’s Memorial towers over the waterfront. It’s a stirring public art reminder of those who have been injured or lost their lives to the industry over the years.

Continue along the park’s circuit trail to find another evocative reminder of the past. Scotch Pond was the home of the Scottish Canadian Cannery, one of more than a dozen similar operations that once dotted the Steveston shoreline. Built in 1899, there are still remnants of the raised wooden walkway that once led across the water to this cannery. You’ll also find a large, barn-like structure on piles here; it once housed a busy, family-run boatworks that was constructed here in 1905.

You don’t need to read up on these historic sites before you arrive: there are several well-written plaques dotted around the park, some with excellent black and white photos that transport you right back to yesteryear Richmond.

For many visitors, the main appeal of Garry Point Park is the expansive waterfront. The park’s southern edge is a string of small sandy beaches backed by tangles of driftwood logs where you can sit and watch the fishing boats and pleasure vessels coming in and out of the Steveston Harbour through the fast-moving waters.

Garry Point’s natural side is a little more subtle than some Richmond parks—although that subtlety goes out the window every April when more than 250 carefully cultivated cherry trees make this a magnet for cherry blossom fans. The rest of the year, the park’s understated flora ranges from colourful bluebells to vibrant azaleas.

This is also a popular pit stop for birds. On our visit, we saw swallows, white-crowned sparrows, and two bald eagles flying overhead. And on Scotch Pond’s muddy flats, there was also a gaggle of well-parented goslings plus a busy group of sandpipers looking for food. At other times, you might spot herons, cormorants, or even snow geese, which flock to the area in large numbers each winter.

Keen to discover more of the city’s natural diversity? The West Dyke Trail connects directly to Garry Point Park’s northeastern edge, and you can walk or cycle it to enjoy even more of Richmond’s outdoor spaces. The West Dyke Trail is flat and full of scenic views—it’s the perfect place to get some excellent sunset photos.

Garry Point Park is a short stroll from the centre of Steveston Village; reach it on foot via a wide walkway that runs alongside the Gulf of Georgia Cannery National Historic Site. Steveston is easily reached by public transit—plan your trip via TransLink’s website.

A couple of things to keep in mind: dogs are allowed in the park, but they must be leashed; and feeding wildlife and picking plants is not permitted. The park also has good washrooms, a picnic area, and plenty of benches.