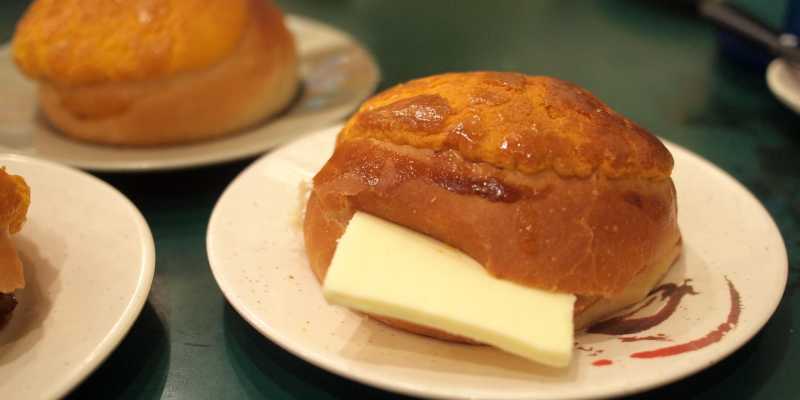 Apparently, pineapple buns are a really big deal around here. Ask just about anyone who has lived in Richmond for any substantial period of time, assuming that this person is reasonably up to snuff on Hong Kong style bakeries, and they’ll tell you that Lido is king of the crusty topped castle. And this is true even if the person has never actually had a pineapple bun at Lido. Word travels quickly.

Located in Central Square, a smaller two-level strip mall nestled in between Aberdeen Centre and Parker Place, Lido Restaurant (4231 Hazelbridge Way) is your classic Hong Kong style cafe. It doesn’t boast the new and shiny appearance of somewhere like Copa Cafe. It hasn’t updated its menu to include more Taiwanese inspired dishes. There’s no bubble tea and they don’t take credit cards. It’s cash only and service is curt and efficient.

Yet, if you come to this otherwise humble eatery on any given morning, even in the middle of the week, you can expect a queue out the door to get a table. It also doesn’t help that parking in Central Square is somewhat limited, coupled with the fact that people are parking there for the other businesses in the plaza too.

If you’ve never been to a cha chaan teng (a Cantonese term that literally translates as “tea restaurant” and is used to refer to Hong Kong style cafes like this), then stepping into Lido Restaurant for the first time can be a little intimidating. The walls are plastered with brightly-colored signs boasting all sorts of specials, including more adventurous options like snake soup.

The challenge is that they are almost exclusively in Chinese. And despite what my surname may lead you to believe, I can’t read the characters aside from knowing my name, one to ten, and a few other random terms like “door,” “mouth” and “big.” Cantonese is the primary language spoken here, which makes sense given the Hong Kong heritage, but don’t worry; the servers generally speak English just fine.

And yes, the main menu comes in both English and Chinese too, offered as a pair of double-sided pages for breakfast. As is par for the course with a Hong Kong style cafe, you’ve got one side with a “western” breakfast and another side with a “Chinese” breakfast, both of which are served until noon. That’s at least an hour later than most.

While Lido doesn’t really position itself as a bakery, per se, a number of bakery-type items are available on the menu. You’ve got a winter melon puff pastry, a ham and egg bun, and a cocktail bun, for instance. Another mainstay is the Egg Tart, which I found to be on the pricey side at $1.85 each.

The “Chinese style” breakfast at Lido could easily be mistaken for the lunch menu, as you largely get to be pick between a variety of congees and soup noodle combos. We opted for the Seafood Congee Combo ($8.00), a rice porridge with some shrimp and squid. The consistency is such that you can still make out the individual grains of rice without it being overly lumpy.

To accompany the congee, we went with the regular Steamed Rice Rolls. This version is essentially plain, aside from a little bit of chopped scallion. It’s a no-nonsense kind of dish presented in a “take it or leave it” kind of fashion.

The congee combo can alternatively be paired up with a Chinese donut or a hot beverage at no additional cost, while upgrading to turnip cake, rice cake, pan fried new year rice cake or a cold beverage will cost you a little more.

To satisfy our desire for meat and eggs, we also ordered Western Breakfast Combo G ($9.25). This comes with a butter bun, ham, pan fried eggs, and a choice of one more substantial meat item. We upgraded to the lamb steak for $2.00, which got us two fairly large pieces of lamb.

The kind of meat choices you get here for breakfast are almost comparable to what you might expect for a mixed grill at Alleluia Cafe or any number of other cha chaan teng restaurants. Other options for Combo G included garlic chicken steak, pork chop cutlet, a rock cod cutlet or even a sirloin steak.

If you’d prefer the more standard Hong Kong “western” breakfast with both a small bowl of soup noodles, like satay beef macaroni, as well as a meat and eggs dish, Lido has those too.

At other restaurants, the “main” dishes described above would be the reason why you’d go there to eat breakfast. That’s not really the case with Lido. The real star of the show is the Pineapple Bun with Butter ($2.75). It doesn’t look like much and you might wonder why this little baked good has become such a big deal.

Then, you bite into it and any semblance of doubt just melts away, just like that slab of butter sandwiched in the middle. I know the inclusion of butter in this way is common in Hong Kong, but it was never a part of the bakery culture in Vancouver for me growing up. After enjoying it with the slightly warm pineapple bun at Lido, I understand why it’s done.

The cold butter provides a wonderfully indulgent contrast to the flaky top of the bun. It sounds weird, but it works. The butter does not go all the way through; about the same amount protrudes out of the sliced bun, as pictured above, as is hidden inside the bun.

If you’re not feeling quite as indulgent, the pineapple bun can also be ordered without butter for $1.85, just like the egg tart. This is still more expensive than how much most other bakeries around town charge, but it’s realistically about the same as how much you spend on a croissant or a lemon loaf at Starbucks.

If you’re dining with someone else, getting one bun with butter and one without is a healthy medium — and I use the term “healthy” loosely — as you can split that stick of butter in half.

The western breakfast combo and the pineapple bun sandwich both came with a complimentary beverage, so we got a Hot Milk Tea and a Hot Mixed Coffee and Milk Tea. They were also surprisingly good and, despite appearances, a step above what you might find elsewhere.

It surprised many of my friends that I had never been to Lido and I’ve never eaten one of Lido’s pineapple buns. They almost wanted to strip me of my “foodie” badge, if such a thing existed. Now, I understand why. I have seen the way.

While practically all of the other breakfast items, like the congee and the fried eggs, aren’t a monumental improvement over what you might find at another half-decent cha chaan teng, the pineapple buns really are something else. Maybe it’s because they were served warm from the oven. Maybe that stick of butter made all the difference. I’m not sure.

What I can say is that if you are looking for the best pineapple bun in town, Lido is the undisputed king. The breakfast menu is a hair more expensive than some cheaper alternatives, so if you’re not here for the famed baked treat, you may want to look elsewhere with more parking and less of a wait.