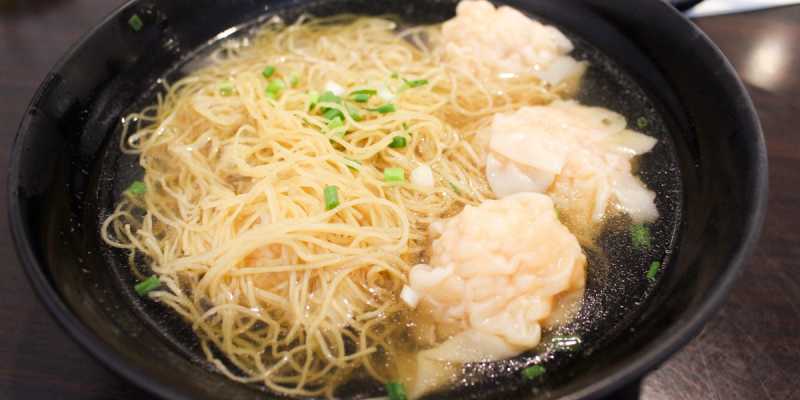 Perhaps one of the most endearing dishes in Chinese cuisine is Wonton soup. It’s well known and loved by many, and there have been many variations depending on where in Asia you go.

The characteristics of wontons include a thin, flour wrapping that becomes slightly translucent after cooking, and are stuffed mainly with prawn, pork, shallots and ginger. The wontons are typically served in a piping hot bowl of soup and coordinating wonton noodles cooked al dente. The order in which the ingredients are placed within a bowl go: soup spoon at the bottom, then the wontons, garnishing (if any – usually a sprinkle of chopped green onions), noodles and then soup added over it. The reasoning for this specific order in plating is to not overcook the noodles so it become a soggy mess. In some places, you can order your wonton soup with a plate of wontons and a bed of noodles and the soup on the side.

What differentiates wontons from other dumplings is the thin wrap. Most dumplings are usually served with a thicker wrap.  Wontons originate from China, with evidence of its existence going as far back as the Qing Dynasty (1644). Wonton soup was enjoyed by the rich, upper class families but after World War II, it became more widespread. As the economy improved after the war, the dish moved to Hong Kong, where many hawker stalls opened up to serve the dish to the working class. Due to it’s popularity, some variations of wonton include medicinal ingredients as a way to serve it to those who may not enjoy the strong taste of medicine. In Cantonese, ‘wonton’ roughly translates to ‘clouds’ – as the wontons look like clouds floating in the soup.

When more Chinese nationals immigrated to the United States, they brought along the dish, amongst many others, and opened up restaurants to enjoy a taste of home in their respective Chinatowns. To make Chinese food more accessible to Americans, Chinese chefs created fusion items that felt more familiar and acceptable. This led to iterations including Crab Rangoon and Wonton tartlets.

Crab rangoon, also known as deep fried wontons with cream cheese and crab as its filling, gained popularity in the 50s. In more recent years, wonton tartlets became popular again – baked wonton wrappers that held almost anything including poke, caviar or even goat cheese with herbs.

While these two dishes are considered Westernized Chinese dishes, you will never find these types of wontons in an authentic Chinese restaurant menu. The closest you’ll get to something that has been Westernized is the deep fried wontons. These wontons are typically served with either a sweet and sour sauce or red vinegar.  Another popular method of serving wontons are in chilli sauce. These are popular in Hong Kong style cafes and Taiwanese restaurants.

Tsim Chai is a busy restaurant situated in a small strip mall just a couple blocks northeast of the Brighouse Canada Line stop. While they have an extensive menu of Chinese dishes, their wontons are one of their most popular menu items. Tsim Chai serves up the traditional bowl of wonton noodle soup, wontons in chili sauce and even deep fried wontons. Their wontons are larger than most places and have good taste to them.

A little further down on Westminster Highway is 4 Stones Vegetarian – while not your typical place for wontons as it is a vegetarian restaurant, it is the uniqueness and flavour of its vegetarian wontons that make them notable. You’d be hard pressed to find a Chinese restaurant that is all vegetarian, but 4 Stones is just that. They are a small, hole in the wall eatery that can be quite busy depending on the time of day.

With over 800 restaurants in Richmond, there are many places to explore. With the Dumpling Trail, Tourism Richmond has helped narrow down some great choices for dumplings including wontons. Recently, the self guided tour was featured on the SoCal Restaurant radio show – a show dedicated to expanding food knowledge.

Where is your favourite place to enjoy wontons?