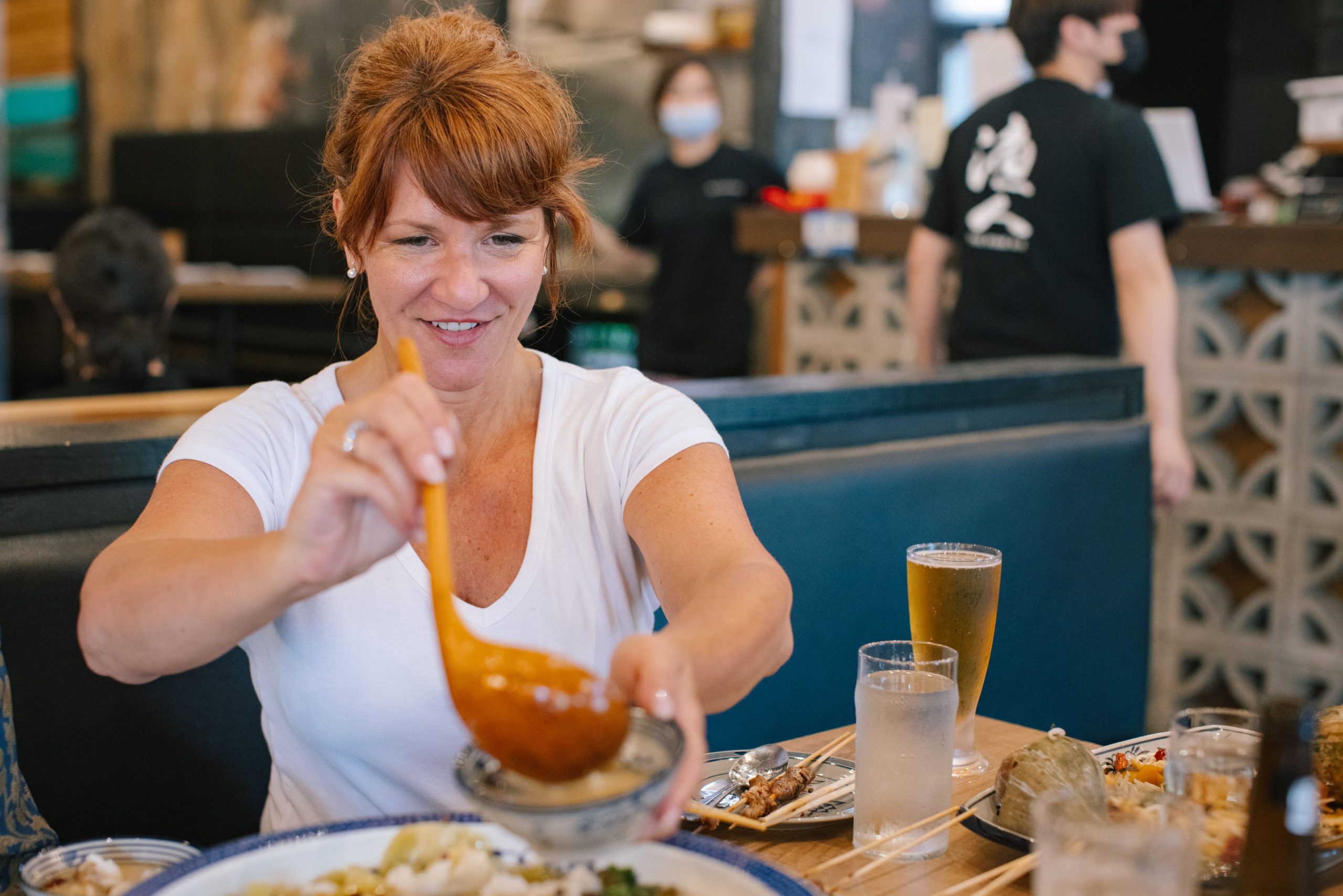 Dine Like A Critic On This Unique Richmond Food Tour

“I knew almost nothing about these restaurants back then,” she says. “But I really wanted to learn so I could review them seriously.” Tapping local experts and plunging in palate-first, she gradually built an in-depth understanding of the authentic dishes available here from China and beyond – plus the all-important customs and cultural contexts associated with them.

Fast-forward almost two decades and the award-winning journalist – she’s also been a judge on TV’s Iron Chef Canada and a jurist with the Vancouver Chinese Restaurant Awards – is now ready to share that knowledge face-to-face on a unique guided tour. Her aim? To help locals and visitors who are hungry to explore Richmond’s Asian dine-out scene but don’t know where to start.

Not Just Another Food Tour

Gill’s immersive private tour – The Richmond Chinese Dinner Party: Classic Cantonese to New Wave – takes guests on an intimate evening adventure through 10 or so diverse dishes at two distinctly different local restaurants. Alongside the curated menu, she serves a side order of insider knowledge about the scene, the cuisine and her unusual job as a professional restaurant reviewer.

The approach, says Gill, is less of a traditional tour and more like a great night out with friends, complete with a feast of revelatory dining and some deliciously piquant chat. “Every tour is a bespoke, personalized experience with a small group,” she adds, noting that she assesses how much participants already know about Chinese food so she can tailor the three-hour-plus tour to them.

It’s a great spot to explore some timeless Chinese dishes, as well as discovering a surprise or two. “At Chef Tony, I usually include the braised whole Dungeness crab, stir-fried greens with preserved meats and a chicken dish – often, it’s the roast chicken with black truffles,” says Gill.

And then there’s the jellyfish. “I always make sure we have this,” she says. “It’s as rubbery as an elastic band and it can be difficult for Western palates, but it’s a great way to show that texture is just as important as flavour in Chinese cuisine.” For many participants, she adds, this dish is a revelation. “People are often surprised by how much they enjoy the jellyfish on the tour!”

Second Bites at The Fish Man

A 10-minute walk away, the group slides alongside a table at The Fish Man, a buzzing casual eatery popular with families and groups of chatty young diners. The menu here, says Gill, is peppered with intriguing surprises. “It’s known as a Szechuan restaurant but they cover all the culinary corners of China in a kind of fun, freewheeling approach,” she says.

The exciting dishes Gill orders for her guests here range from a delicious platter of wok-fried clams studded with peppers to a tray of finger-food skewers influenced by a taxi driver snack in Xinjiang -varieties include nuggets of velvet-soft beef, ribbons of pasta-like bean curd and chewy-crunchy chicken knuckles.

Sometimes, Gill mixes up the four or five dishes she orders here. But there’s one Fish Man item that always reaches the table. “The sour cabbage hot pot is one of my all-time favourite Richmond dishes, and guests often tell me how much they love it.” This gargantuan bowl of peppery, pickly broth brims with lingcod chunks, tofu squares, cabbage hunks and more–and it triggers a kind of mental drum roll when it arrives in front of diners.

Gill’s tour––which also includes drinks and a take-home dessert–isn’t just about filling up on great food, though. Guests are also served the flavourful backstory of Richmond’s ever-evolving Chinese dining scene, from 19th-century settlers to 1980s Hong Kong immigrants to a more recent wave of mainland China arrivals who have triggered a deep dish of local eateries focused on regional diversity.

But that’s not all. “I’ve also found that people really want to understand the protocols, customs and etiquette of dining here, from how to create a balanced meal with the dishes you order to engaging the maître d’ in helping you select well from the menu,” she says, noting that she sends guests home with a handy cheat sheet of Asian dining tips to help inform their future experiences.

She also gives them a printed rundown of local restaurant recommendations, gleaned from more than 15 years as a nationally renowned Metro Vancouver dining expert. Tour guests, she adds, regularly quiz her about her unusual career as a restaurant critic.  “I’m often asked on the tour about how my job works and how I choose which restaurants to review,” she says.

One key thing she’s learned over the years? Great dining isn’t just about what’s on the plate. “As a critic, I always want to be wowed when I eat out, and that’s what I want people to feel on this tour,” she says. “But this is much more than a regular culinary tour. I also want to challenge perceptions and help people reach a deeper understanding of the food and culture of Richmond.”

If you go: Alexandra Gill hosts The Richmond Chinese Dinner Party: Classic Cantonese to New Wave tour by appointment. This unique culinary adventure, which runs everyday from 6pm, costs $199 per person (food, drinks and gratuities included). The tour has a minimum of four and a maximum of nine participants.